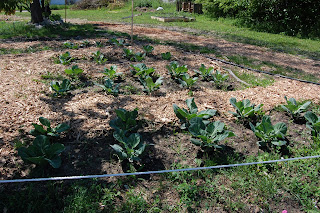 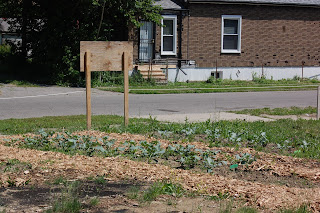 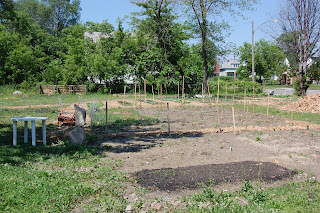 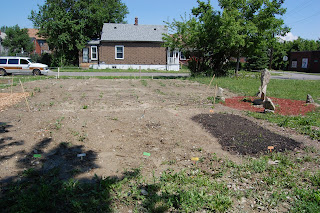 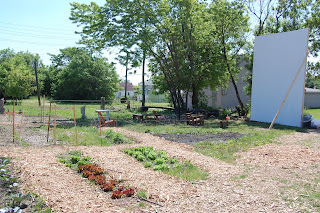 I stopped by to see Cub's garden today.  I had some photographs to take at Mt. Olivet and needed a few family graves dug up and raised so it was the perfect excuse to stop by.  As you can see, he's come a long way.  All of his seeds and plantings are up and Cub has even said that dirt that was once completely barren is now filled with worms and falls apart in his hands.  By next year, his soil should be just about perfect once old crops are tilled in.
Cub stated that most nights he and the neighbors are out watching movies.  Kind of a perfect way to spend an evening - in a garden with a large screen, a fire and good friends.  In time I'm sure he'll be resident popcorn maker, too.  We spoke about the neighborhood and how most of his life was spent here so he's well aware of everyone who walks by and everyone waves or honks to say hello.  There are always a few when I'm there and it's a friendly place.  I also noted that the Community is protective of the garden.  Cub was alerted by a neighbor that there was "a woman in the garden taking photographs".   A couple showed up earlier and were placing wood chips in bags but Cub was given the heads-up and they put the chips back.  "Community" doesn't mean "Swoop in 'cause it's all here for you!" - A little sweat and you've earned some veggies in the Fall.  Until then, HANDS OFF!
Cub is having a Greening of Detroit BBQ coming up.  I'll have more specifics to post as the date draws near but so far it's for July 12th.
In the meantime, I'm going to feature a citizen who resided in Detroit every once in awhile.  I'm up for all ethnicities to be listed and researched so if you know of an interesting person who may have a photograph on their stone, let me know.  Just name the Detroit cemetery.   I'm starting my first Detroit citizen that I stumbled upon in Mt. Olivet and will post a few short bits on him later today.  I think this would be an interesting addition to show those who lived and contributed to the City.  Your input is always greatly appreciated.
Posted by Thunderbird at 1:57 PM No comments: