Well, I was going to write about Detroit's organization called Urban Farming but reading a bit further, I'm finding that Taja Sevelle, who is president of this organization (and used to sing for her supper), is not allowed by the City of Detroit to buy vacant land to make compost available to other urban gardeners within the City.  Because of this, she will not make compost available to any more "new" gardeners.  I'd call this punishment on the people of Detroit because of City politics.
A vicious circle all the way around.
At the same time, she has enough PR with Atlantic Records and sponsorship by Prince that it seems only her efforts are acknowledged publicly.  There are literally hundreds of gardens in Detroit that have no publicity and are one or two people plowing vacant lots as hard as concrete to feed neighborhoods while she bitches about the City not selling her land.  Wouldn't it be great if others working land could afford the $200 per lot like Taja can?  Cry me a river, Taja.
Maybe Prince can pitch a clue to Kwame that compost doesn't attract rodents?  Wait, Kwame is a rodent.
Nevermind.
Posted by Thunderbird at 10:46 AM No comments: 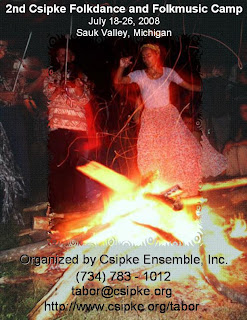 Having a  conversation with the Mayor of Hamtramck, I was reminded of the Csipke Dancers.  I think this is an important part of Detroit as Delray was home to hundreds of Hungarians who left Delray for Lincoln Park and Allen Park.  My husband's family lived in Delray in the early 1900's and I recall my grandfather taking me for lunch at Al's Lounge a few times.  Everyone remembers Joey's Stables and The Fancy Pastry Shop (now located in Allen Park) and I still have conversations with those who lived there that recall the Grape Festival and all the trees that used to line the streets.
This camp teaches those who are interested in Hungarian culture, traditional dance.  If interested, the Csipke dancers have their own website at Csipke.org.
Posted by Thunderbird at 2:47 PM No comments:

What Used To Be 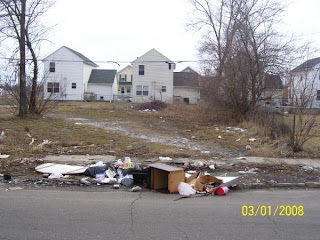 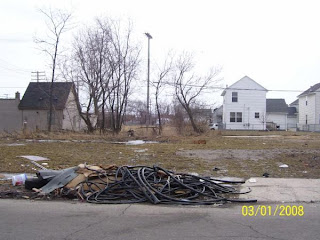 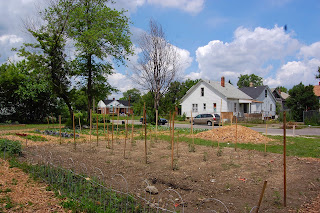 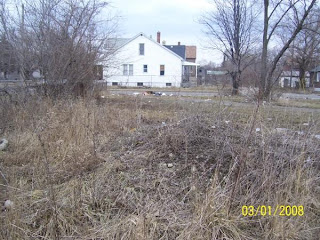 I was searching Google's map site and decided to look up Georgia Street.  Google has been sending out cars with mounted photography equipment on the roof to photograph all neighborhoods and streets.  Believe it or not, the ground-level Google photographs are worse than the photographs here (Cub took these).  Unfortunately, Google won't let my Mac snag their photos but I just wanted to post a reminder of what these four empty lots used to look like before Cub decided to change the place.
Something that stands out while standing in Cub's garden these days; color.
Just a little reminder of what one person can do when they set their mind to it.
(Click on photos for larger view)
Posted by Thunderbird at 11:22 PM No comments: 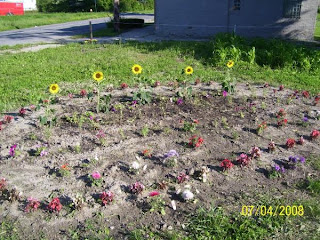 Cub's latest update is his flower beds.  This side of the garden was pretty overgrown for a bit.  I had to pull in at this area to drop off some concrete borders and knew Cub hadn't moved to this area (four vacant home lots is a big area!).
The garage that you see in the background is actually in pretty good shape and well taken care of so I know this photo is off the alley.  Cub's slowly cleaning and clearing out.  I'm sure The Greening of Detroit sees his hard work and hopefully rewards him with all the necessary compost and supplies to make this garden a success this year and next year.
With the price of gas, I haven't had a chance to stop by.  I actually haven't been anywhere because of it!  I've sat around and watched my tomatoes growing (they're a bit leggy because of all the rain) but I've lost 10 pounds sitting around reading about St. Albertus Church.  I have no clue how that happened.  Here's hoping reading a dictionary removes another 10.
Posted by Thunderbird at 12:22 PM No comments: