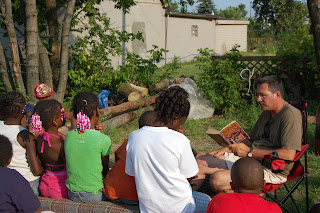 Now that I'm done ranting, it's another night of reading and movies for the kids (and adults) at the Georgia Street Community Garden in Detroit.
Reading starts at 7 p.m August 2nd.  Movies begin at dusk.
Don't forget food.  Bring some!
Posted by Thunderbird at 1:30 PM No comments: 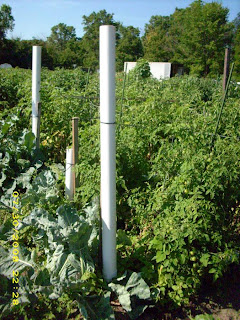 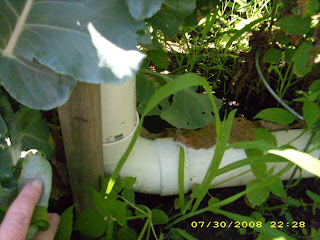 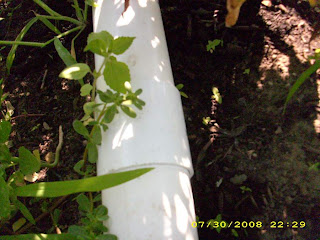 A few photos of the PVC pipes for the perfect watering system for Cub - Next year's garden, maybe?
I felt underneath the piping. There is a line of small holes drilled underneath creating a slow drip of water.  As you can see from the size of his tomato plants, the system works. 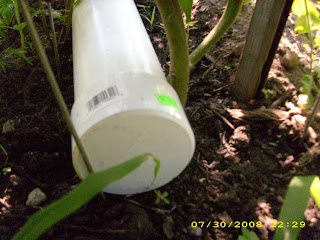 MSU Researcher Says Your Garden Can Give Boost To Bees

EAST LANSING-Most people go to public gardens to enjoy the flowers.  Julianna Tuell is there to see wild bees.  "There are a lot of little ones," says Tuell, leaning toward the flat yellow tansy flower head in the Michigan 4-H Children's Garden.  She spots a sweat bee: "There's a little one-a little girl, I should say."
Tuell knows a lot about bees and she makes the case that the rest of us should pay more attention to.  An estimated 80% of all flowering plants depend on a living creature, mainly bees, for pollination and see production.  "Bees are responsible for one in three bites of food you eat," says Tuell, who studies bees as a post-doctoral researcher at Michigan State University.  Wild bees that are native to North America are getting more attention these days.  That's because of the mysterious disappearance of up to 90% of honeybees from managed hives across the country and its potential impact on food crops.  If there are fewer honeybees, wild pollinators will be even more critical.  So if you like fruits and vegetables - not to mention spices, coffee and anything else made from plants that require pollination-give some thought to how you can encourage animal pollinators,ing hummingbirds, bats, small mammals, beetles, ants, wasps, butterflies and moths.
And wild bees.
Bees dig into flowers on a wide range of plants-tomatoes, asparagus, melons, among many others-gathering pollen and nectar for their offspring.  In the process, they brush pollen from the male onto the female floral parts.  Pollination leads to seeds and that leads to abundant crops of fruits and vegetables.
Originally from Europe, honeybees are so good at pollinating that they have become a vital part of agriculture.  Managed honeybee colonies are trucked from Maine to California to pollinate crops like almonds, apples and blueberries.
past few years, honeybees have started to disappear, a puzzle known as Colony Collapse Disorder.  While the cause is unknown, some scientists believe honeybees are under stress that makes them more vulnerable to pests and disease.  "We have been treating them like a tool, and that may be part of the problem," Tuell said.
While honeybees are managed commercially to pollinate agricultural crops, wild bees do the work, too.  There are almost 400 species of wild bees right here in Michigan, according to Tuell, a 35 year old entomologist.
On a hot, sunny, muggy July day, she is walking among the plantings at the children's garden on the Michigan State University campus, pointing out the types of plantings that attract bees.  "They really like this hyssop," Tuell says, stopping in front of a shrubbery herb.  "You really can't go wrong with anything in the mint family."
In fact, many herb plants like lavender and rosemary are bee magnets.  Their agitated bodies hover over the flowers, humming like a chorus of cell phones on vibrate.  Bumblebees and some others actually get on a flower, buzz violently, and shake out the pollen.
Bees prefer white, yellow and purplish flowers over red ones (the latter attracting hummingbirds and butterflies).  But even more important, from the bee's perspective, is that there are plant diversity and a succession of flowers opening from early spring through fall, providing them food season to season.
Gardeners can do that and so can farmers.  Provide access to an environment free of pesticides and herbicides, with clean water and a variety of plants.  That helps wild bees because the natural habitat they depend on is on the decline as development advances.
A native of Lansing who received her undergraduate, master's and doctoral degrees from MSU, Tuell started out studying plants and switched to bees, Her thesis involved blueberries.  Blueberry farmers bring in honeybees for pollination, but Tuell wanted to know the role wild bees play in sharing work.  "I found 170 species," she said.  Bees aren't the only creatures that help pollinate crops, but they do a very efficient job of it.  Still, some people may be wary of planting to attract wild bees.  Compared to yellow jackets, which get aggressive by late summer, wild bees are mostly placid, Tuell said, minding their own beeswax as the females go from flower to flower for pollen and nectar.  Most wild bees are solitary and unlikely to sting unless someone threatens them.  So don't swat at a bee.  Bees and other stinging insects that live in colonies are more likely to get defensive and aggressive if you do.  Male bees don't sting (nor do they collect pollen).  Most native bees, other than bumblebees and non-native honebees, cause only mild stings.  But it can make an impression.  Ella Miller, 4, of East Lansing, who was visiting the 4-H Children's Garden, said, "One time, I got stung by a bee," with a gravity that suggested the event was still fresh in her mind.  And, of course, for the estimated 1 in 100 people with a severe to potentially fatal allergic reaction, attracting stinging insects is probably not a good plan.
Still, in all her years of research, Tuell said, she has been stung only a few times -- once while wearing a full bee suit with an incompletely closed Velcro neck opening.  Two bumblebees got inside and stung her four times.  But, in general, wild bees are vigilant workers.  They have a job to do and their focus is on flowers, not people.  "You can get right up close to a plant in bloom and the bees will ignore you," Tuell said.  "The only times I've gotten stung is when I've been messing with a colony."
So don't be afraid.  Get out to a public garden and look at the bees.  Try to tell the boys (shiny, thin hind legs) from the girls.  (Their hairy hind legs that look like yellow-orange brushes when they're loaded with pollen.  Sometimes the whole bee resembles a flying Cheeto).
See where the bees go, then take that information home to apply in your own backyard.
Contact Marty Hair at 313-222-2005 or mhair@freepress.com.  Photos by Regina H. Boone.

Posted by Thunderbird at 8:15 AM No comments:

Oh, those whacky British!
Posted by Thunderbird at 8:08 PM No comments: 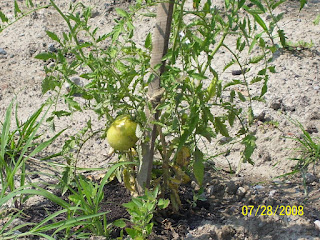 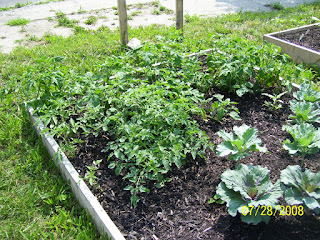 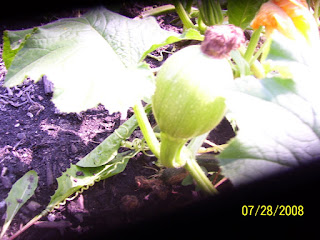 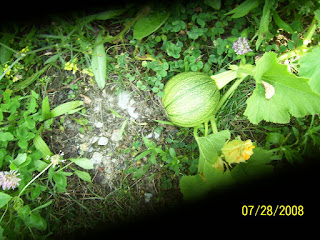 My tomatoes look sick too. The tomatoes in the raised beds look great.
Two more pumpkins have pollenated. I used a cutip to try and pollenate some more. LOL!