Detroit Synergy Workday in the Garden 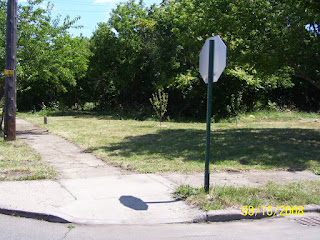 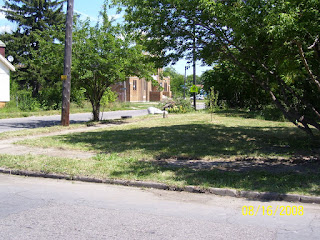 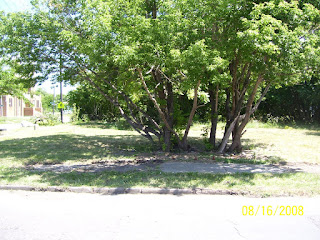 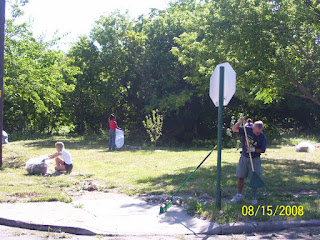 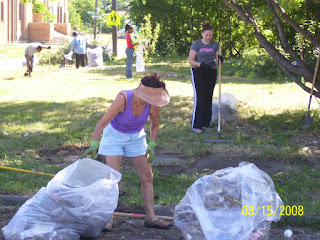 Thank You Detroit Synergy. We got aa lot done today. The orchard looks like a small park.


I still have a lot of work to do. But it looks great.

Metro Gardeners Get More Green For Their Cabbage

Most evenings, usually before the family sits down for dinner, you'll find Francine Creer and four of her children in the backyard of their home on Detroit's northwest side.  They're either removing weeds or gathering lettuce and peppers for the dinner salad from a plot they call "Matthew's Garden," so named because it was 13 year old Matthew's idea to start it.  Matthew, you see, got a little tired of his mom telling him she didn't have money to buy on thing or another that he wanted.  A vegetable garden could help reduce the food bill and leave more money for other things, he decided.  This year marks the Creers' second and bigger garden.
They're among an increasing number of metro Detroiters growing vegetables for reasons ranging from reducing food costs and increasing food safety to the simple joy of watching something grow and go from the garden to the food table.
Gardens appear to be popping up all over.
No one keeps track of the number or kinds of gardens.  But statistics from the Detroit Garden Resource Collaborative, an information and support network, give an indication based on those signed up with the program.  It reports that from 2005 to 2008 the number of family gardens grew from 79 to 220, and the number of community garden grew from 80 in 2005 to 115 this year.
But untold numbers of gardens have no connection to the resource program.
Ruth Gretzinger of Ann Arbor, calls hers a "victory garden," a tribute to home gardens that were popular during World Wars I and II.
"The idea was we're at war and everything costs too much money to buy, so why no grow your own," says Gretzinger, a University of Michigan writer and Web project manager.
She planted less than she'd initially planned, but still her tomatoes, peppers, parsley, oregano and lettuce have put a small dent in her grocery bill.
"Normally, I would have brought tomatoes at least once a week and I haven't had to buy any," says Gretzinger, a single mom with a 17 year old daughter, Elizabeth, who's bound for Central Michigan University this fall.  "every little bit helps.  The other night, I made myself a BLT with my own lettuce and tomatoes and that was pretty nice."
James Smith, 82, turned the land where three houses once stood near his Detroit home into a home for collards, string beans, lima beans, Crowder peas, squash, peppers and more.  There's enough to feed the retired Ford worker's 11 adult children, his grandchildren -- he says he has about 30 -- and "I don't know how many great-grandkids."  And he still has enough to share with neighbors and friends.
"I was raised on a farm and I've always liked it," says Smith, who was born near Selma, Ala., but has lived in Detroit most of his adult life.  "Where I came from, if you didn't grow food, you didn't eat."
Robin and Steve Reisig have had a garden at their Sylvan Lake home for sever years, primarily to eat healthier.
This year they decided to try something different -- edible landscaping.  Where grass once grew, there's now an assortment of fancily arranged vegetables and herbs, including beets, tomatoes and peppers.
"It wasn't about the cost; it was mainly the quality of the food and the fun of doing it," Steve Reisig, 59, says.  "But eventually, we will probably save money.  Some of the tomatoes we're growing cost $3 to $5 each at Whole Foods."
Matthew Creer, 13, says there wasn't one incident that led him to think of the garden, just what sounded to him like too many "no"  or "maybe later" answers.  His mom, Francine, has been on disability since she suffered a back injury in 2000 while working as an EMS technician.
After seeing a big cabbage his sister Suyvann, 11, grew, Matthew got the idea that maybe he could grow vegetables too.  She won second place in a contest for the biggest cabbage at Gesu School about three years ago.  He learned about gardening by helping out fellow church members at a community garden at Gesu, the nearby parish his family attends.  The garden has become a family project.  They have string beans, radishes, carrots, beets, broccoli, eggplant, varieties of lettuce and tomatoes and more.
"I hardly have to go to the vegetable aisle of the grocery store anymore," says Francine Creer, 50, who has three adult children in addition to the four at home.  "There's a lot we don't have to buy because we grow it in our garden."  The savings have enabled the children to go to the movies and a carnival, they say.  And the benefits have grown money, Creer says.  She's found working the garden together a good way for them to enjoy one another's company.  "There's no TV or video games or computers on when we're in the garden, "Creer says.  "They get to talking and I get to listen to what's going on in their lives."  They enjoy it too.  "I like being out there and looking at the plants grow," says Noah, 9.  It's also a good disciplinary tool, Francine Creer says.  "When they start arguing and getting on each other's nerves in the house, I say, 'OK, it's time to get outside and get in the garden.'"
Contact Cassandra Spratling at 313-223-4580 or cspratling@freepress.com
Photos by:  David Kilkenney, Cassandra Spratling and the Reiseg family.
Posted by Thunderbird at 1:22 PM No comments:

From an e-mail sent out for DetroitSynergy: Join me at Georgia Street Community Garden this Saturday!!Tuesday, August 12, 2008 6:56 PM From: Regina Fortushniak

Good Afternoon DSG Shares Volunteers, Thank you for your involvement and commitment to past DSG Shares projects. Because of your commitment to responding to hunger and homelessness issues across the city of Detroit, in the past 6 months we have: Provided hundreds of snacks to hungry families across the city of Detroit: Gleaners Community Food Bank 3/15/08Assisted families in need of affordable appliances and home utilities: Habitat ReStore: 4/12/08Impacted the lives of homeless individuals in our region by providing lunches for those who are hungry: Cass Community Social Services: 5/31/08Provided healthy, nutritious options for those in our community through urban farming: Earthworks Garden: 6/14/08Improved the surrounding streets of a community organization through clean-up efforts: Salvation Army: 7/26/08


Now this month: Make an impact with a grass-roots community neighborhood garden! Join DSG Shares at the Georgia Street Community Garden this Saturday, August 16 from 10:00 a.m. - 12:00 p.m. The Georgia Street Community Garden was founded on April 8, 2008 as an opportunity to provide residents with a garden and a neighborhood gathering place. The community garden also serves as a community center where residents can bring their children for a book reading every Saturday night. Volunteers will be assisting with a lot clean-up for the formation of an orchard across the street from the existing garden. The Georgia Street Community Garden is located at 9344 Georgia Street between Gratiot and Van Dyke near the Better Made Potato Chip Factory. For more information or to volunteer, contact me at dsgshares@detroitsynergy.org. I hope to see you all this weekend! Sincerely, ReginaDSG Shares Project Lead
Posted by Mark Cub Covington at 11:03 PM No comments: 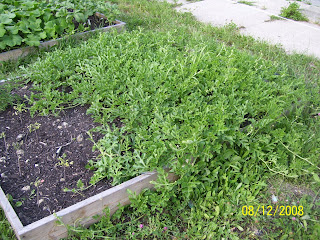 In this bed I planted 8 watermelon plants. They have a bunch of qaurter size watermelons on them.

Posted by Mark Cub Covington at 10:33 PM No comments:

The Tale of Two Gardens 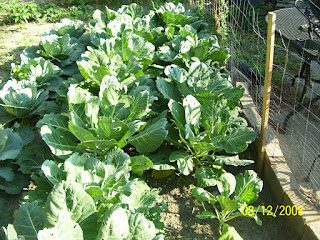 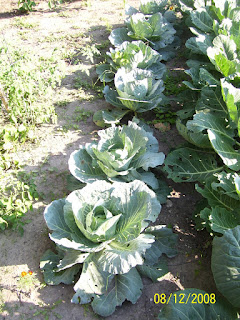 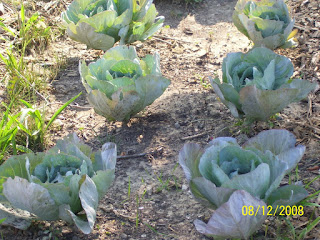 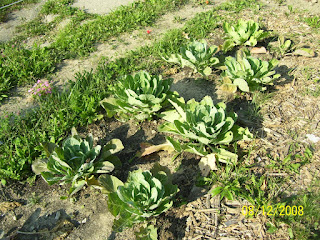 The first two pics are of Collards and Cabbage in my backyard garden. They were started almost a month after the Cabbage and Collards in the next two pics from the Community Garden. The soil in the backyard is softer, darker, and has less clay.

Posted by Mark Cub Covington at 10:06 PM No comments: 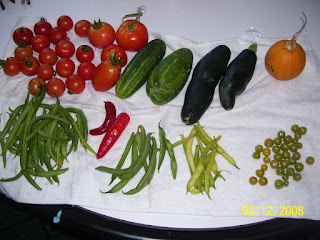 Review of Reading Night from PlymouthRes at DetroitYes.com: (aka The Fabulous Ruins of Detroit!)
Last night was interesting in the fact that despite the rain, there were about a dozen or so kids who showed up to the Garden for the reading!  We had a few new forumer's there as Scs100, Dad and mom, along with Crystal and her husband, Ken and Harriet, all showed up to lend their support!
As Cub said above, we had a new reader, Scs' dad, and the kids showed their appreciation by sitting through another two chapters of Harry Potter despite the on and off again rain.  The rainbows finally did us in at the end as the children were all drawn to their beauty!
The movie was Star Wars I and was attended by the adults, who hung in to the end!  It was a nice ending to a very cool night, and, despite the rain, we were able to generate some heat with a small fire in the firepit, which helped to take the edge off the dampness.
Finally, I would really like to thank Crystal and her husband for their effort to contribute to Reading Night, the cookies and milk, and the support that they have provided by being there.  They live much further out than we do and have at least a half hour to 45 minute drive just to get there, yet they have been out twice (that I know of) to support the effort.  A big thank you to Scs and family, as their support lends credibility to our effort as well and makes the Garden a true place where all can gather, not just the neighborhood.
I would encourage anyone who wants to experience the joy of watching children (and adults!) learn to come out and participate in the reading/movie night-it is a very rewarding experience in many facets, indeed!  We will not let rain or any type of inclement weather deter us from our mission, and the dedication of the kids will always keep us coming back.  If they can make it, so can we!
Next week will be Chapters 6 and 7, and we will be finishing the book soon, which will be followed by the movie itself!
You do not have to bring anything, but I guarantee that you will walk away from the experience with something!
See you at the Garden!
Posted by Thunderbird at 11:08 AM No comments: