Reading Night at the Garden 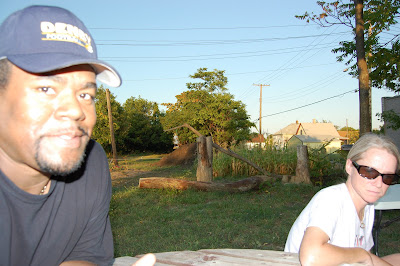 The Cubster and (I'll keep her name private).  This was a really fun night talking with Cub and PlymouthRes and Mrs. Res.  I enjoyed it.  Not having to talk about Mary Poppins and Sponge Bob brings me back to life.  Politics are not allowed in the Garden.  There are some heavy-duty Obama supporters there and I respect that.  Plus, I think I'm out-numbered. 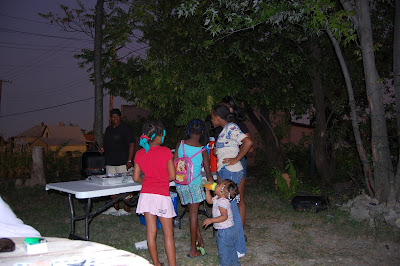 Mrs. Cub makes the best hotdogs.  I even ate the buns.  This means walking 15 miles to keep those buns off my back!  I made sure to bring an extra batch of cupcakes.  All the kids are extremely polite with "Yes, ma'am" and "thank you".  Who couldn't give respect back for that?  These are some great kids. 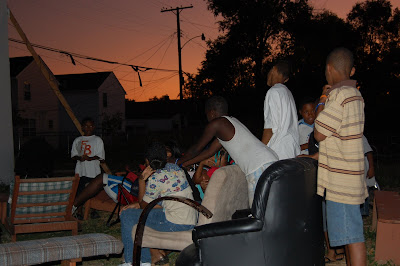 The Movie was "Are We There Yet?"  I've seen it before.  The lead character reminds me of Cub.  The grown-ups got to sit around and yap while all the kids were engrossed with the movie. 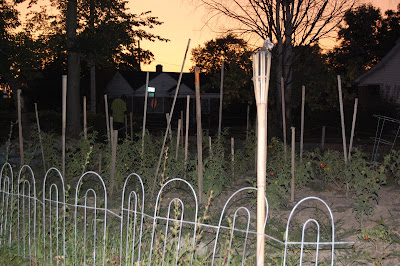 Cub's tomato plants at dusk.  I have to look through my files for PlymouthRes reading to the group and will get them up in the morning.  Had a really nice, somewhat outrageous talk with Mr. & Mrs. Res and Cub.   Hoping to get to know all of them as time goes by.  The question?  What do we all do in the winter?
Posted by Thunderbird at 11:27 PM 2 comments: 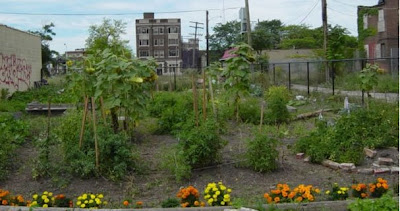 DETROIT
Megan Kohn was watering the neighborhood garden in Romanowski Park when 8-year-old Saba and her friend Alea came by to see what was going on.

After the girls asked to help, Megan directed them to get trowels out of her red truck parked 11 raised garden beds away.

As the trio cleared a bed for planting seedlings, Saba said, “I love gardening, It’s cool. It’s nice. And you can get your hands dirty without getting yelled at. You get to plant things and when they grow, you pick them.”

Such interaction between kids and adults is one reason that Ms. Kohn, an urban agriculture apprentice for the Greening of Detroit (www.greeningofdetroit.com), is encouraging families in the neighborhood to come to the garden to work, visit, and harvest fresh produce.

Another reason is that she and others see such urban gardens – 355 of them so far, planted throughout the 139-square-mile city – as vital to the revitalization of Detroit, often called a rusted out industrial city.

“Food is essential to daily life,” says Ashley Atkinson, director of urban agriculture for the Greening of Detroit, which started in 1989 as a reforesting program for the city’s neighborhoods, boulevards, and parks.

Today, with 25 percent of the land in the city vacant due to the removal of many residential and commercial buildings, Ms. Atkinson has been instrumental in developing gardening and youth education programs to help stabilize and redevelop neighborhoods.

“We have a good model,” she says. “People are coming across the country to see what Detroit is doing.”

The success of Detroit’s urban gardens is more than just food production, however. It’s about connecting people and restoring their confidence so that they can rebuild their neighborhoods. “We build relationships before we do soil tests,” says Atkinson. “That ensures that the gardens are scaled correctly and not too overwhelming to the people who will work on them.”

The Hope District is one example of how the project works. Located at a four-corner bus stop, the Hope District comprises gardens, storefronts, a farm market, entertainment, and a skills training center.

The Peace Zone for Life, a small wooded area, was created as a place for neighbors to settle their conflicts.

The Butterfly Dream Garden provides residents with a space to draw their dreams on small billboards and then work to make them happen.

Mike Wimberley has taken the lead on these efforts and enlisted the aid of 60 to 70 percent of the neighbors. He also rehabilitates local housing and commercial properties through Friends of Detroit and Tri-County, a nonprofit organization that his mother, Lily Wimberley, founded in 1994.

“What we’re doing is to start with one block, and we don’t dare move until we take care of that one block,” he says.

Another key ingredient to the city’s gardening success is Earthworks, founded in 1997 by Rick Samyn of the Capuchin Soup Kitchen (www.cskdetroit.org) on Detroit’s East Side.

Brother Rick noticed that the poor were buying their food at gas stations, and kids were calling Coke and chips a meal. He began a small garden in a vacant lot and two years later developed six other lots by removing debris and regenerating the soil with compost.

The gardens now supply food for the Capuchin Soup Kitchen, which prepares 2,000 meals per day, and the Gleaners Community Food Bank (www.gcfb.org/site/PageServer), which distributes 25 million pounds of food each year.

Four years ago, Earthworks added a 1,300-square-foot greenhouse that produces more than 100,000 vegetable seedlings for family, community, and school gardens across the city.

However, gardening is not just an economic or a community-building asset. It’s considered therapeutic and healing, especially for urban children who often live in a violent and unsafe world.

“The toughest children derive a sense of pleasure and accomplishment by growing plants,” says Sister Nancyann Turner, manager of the youth program at the soup kitchen.

She provides classes in gardening, cooking, and the arts in addition to offering tutoring services and a children’s library.

“Gardening stretches their imagination and stirs their spirits,” she adds. “They are less violent, and there is less crime.”

More than 200 children per week participate during the school year, and 50 to 60 kids sign up for summer programs that include a Peacemaking Camp.

Gardening provides the children with “active entertainment” where they build and create something out of nothing, says Sister Nancyann, who sees it as an alternative to the “passive entertainment” of television and video games.

“It’s so important in a world that is so wounded not to lose our sense of awe and wonder,” she says. “The children were amazed at the eight-foot sunflowers they planted from seeds.”

The urban garden movement began in Detroit in 1992 when Jimmy and Grace Lee Boggs, local labor and civil rights activists, envisioned a different future for the city since it was clear that industrialization was gone forever.

They founded Detroit Summer (www.detroitsummer.org), a multiracial, intergenerational collective that works to transform citizens and their communities by confronting problems with creativity and critical thinking.

“Actually, it was a blessing that Detroit no longer had the illusion of expansion,” says Mrs. Boggs, now in her 90s. “You can bemoan your fate or, as the African-American elders taught, you can plant gardens.”

As the garden movement caught on in the city, partnerships developed among people and organizations and became known as the Detroit Agricultural Network (DAN).

Each summer for the past 11 years, DAN has held a two-hour bus and bicycle tour to show off the community gardens to the public and to demonstrate how gardens are influencing larger issues such as reducing crime, cleaning up trash-strewn lots, connecting people to nature, nurturing leadership in citizens of all ages, and improving property values.

Photo and article by Olga Bonfiglio CS Monitor
Posted by Thunderbird at 6:15 PM No comments: 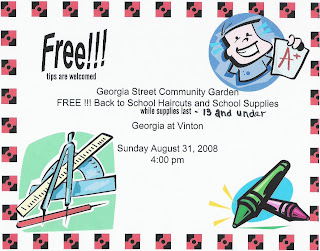 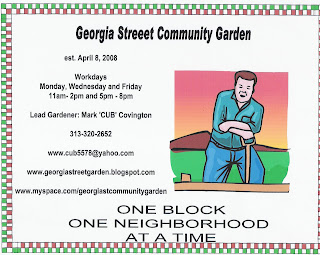 The New Garden Flyer
Posted by Mark Cub Covington at 1:06 PM No comments:

Chocolate covered Ground Cherries from Foodgawker!
Posted by Thunderbird at 12:14 PM No comments:

This is the Mt. Olivet Street Garden in Detroit.  It's not far from Cub's home.  I think it's just beautiful.  Everything is used to make a garden so it's whimsical.  They're the best kind.  Plus, it's down the street from Mt. Olivet Cemetery.  One of my favorite places to visit...lots of interesting dead people there. 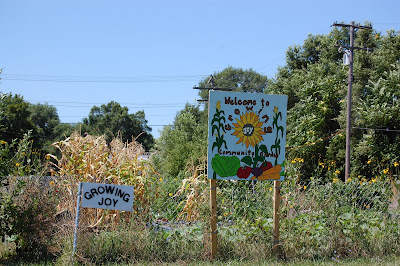 There are gardens all over Detroit.  I just have to be able to afford the fuel to get to them all.  Detroit isn't just downtown.  The place is massive. 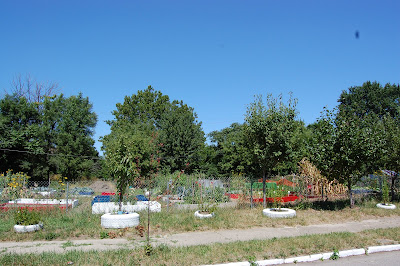 Some beds are empty but most are loaded.  This is a wonderful garden.  Hope to meet the owners in the future. 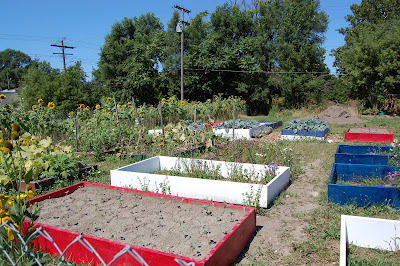 ...everything's painted so it's bright and adds to the neighborhood.  Across the street is an empty field.  Perhaps someday they'll fill the fields with veggies there, too. 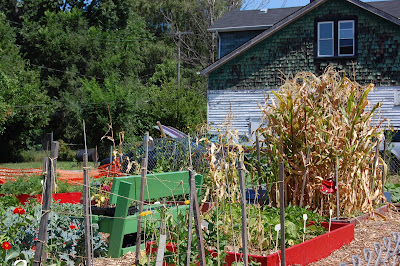 All the tires are filled with fruit trees.  Cub told me that they made the raised beds because the ground tested positive for lead.  There's actually a long row of trees lining the curb and they're doing really well.  Next year they should be loaded with fruit. 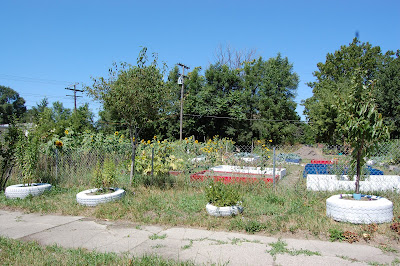 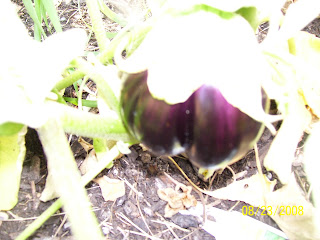 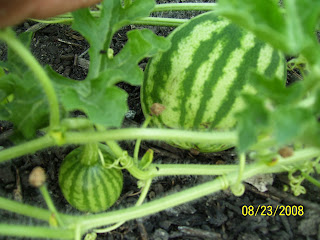 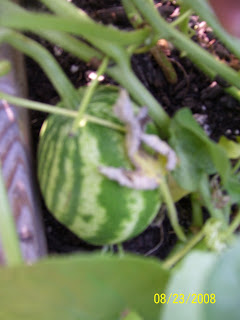 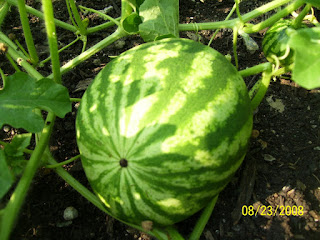 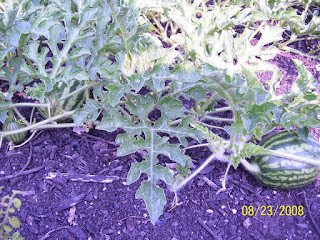 Posted by Mark Cub Covington at 1:00 AM No comments: